Wendy Williams has taken a swipe at Nicki Minaj and her husband Kenneth Petty while congratulating them on their marriage.

Recall at the beginning of August, Wendy offered words of encouragement to Nicki after she received bashing from many online over her relationship with Kenneth Petty, who is a convicted murderer/sex offender.

After seeing the clip of Wendy’s kind words on Twitter, Nicki even thanked the talk show host for using her platform to spread positivity.

On Monday, Nicki revealed on Instagram that she and Kenneth exchanged vows and are now officially husband and wife. But on Tuesday, Wendy threw shade at the rapper, her brother and her now-husband Kenneth Petty on her show while congratulating them

“Can you imagine a burgeoning belly with these burgeoning hips?” Wendy asked. “I mean, the plastic of it all. She’s gonna have a big belly and she’s short and she’s got the boobs and the hips. And I don’t know what he does for a living, I just know that he did time in jail for—he’s a sex offender.” The talk show host took a pause for her audience to audibly gasp at the revelation.

“Well, she’s no stranger to that ’cause her brother’s in jail for sex offending,” Wendy says, referencing Jelani Maraj who was convicted back in 2017 of repeatedly raping his stepdaughter when she was 11-years-old. Going back to Kenneth, Wendy adds, “Well, first-degree manslaughter. Now, he served seven years in prison and he’s also a sex offender. So that means that he…is a manslaughter a killer? Okay. So, he’s a killer and a sex offender.” Wendy ended the segment by saying, “Well Nicki, congratulations.”

Watch the video below. 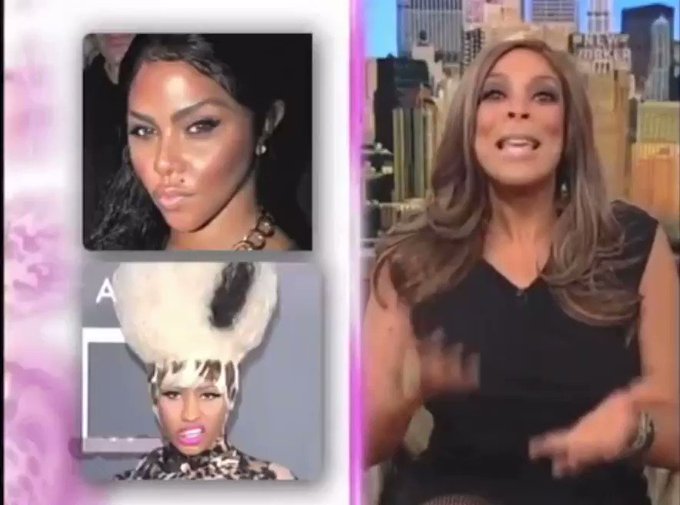 Caption this new photo of Davido and his fiancee Chioma Rowland

Halima Abubakar reacts to T.I’s claims of checking daughter’s virginity : I don’t see anything wrong, my dad also took me to see...

Caption this new photo of Davido and his fiancee Chioma Rowland